In the News: Cockroaches in Ears

From opposingviews.com: Doctors in Australia remove cokroach from man's ear 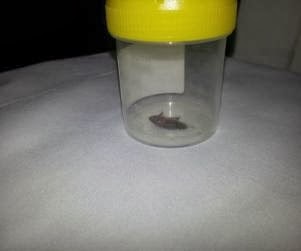 With the pain increasing further, Helmer’s roommate took him to the Royal Darwin Hospital, where a doctor poured olive oil down his ear canal. This only forced the roach to crawl in deeper, before it eventually began to die.

"Near the 10 minute mark ... somewhere about there, he started to stop burrowing but he was still in the throes of death twitching," Helmer said.

At this point the doctor put forceps into his ear and pulled out the cockroach.

“She [the doctor] said, ‘you know how I said a little cockroach? That may have been an underestimate’,” Helmer told the station. “They said they had never pulled an insect this large out of someone’s ear.”

This might seem an unusual story - but as Kroukamp & Londt (2006) report in SAMJ Forum, they're more likely than most other arthropods to end up in your ear (at least in South Africa). This paper also includes one of my favourite charts: 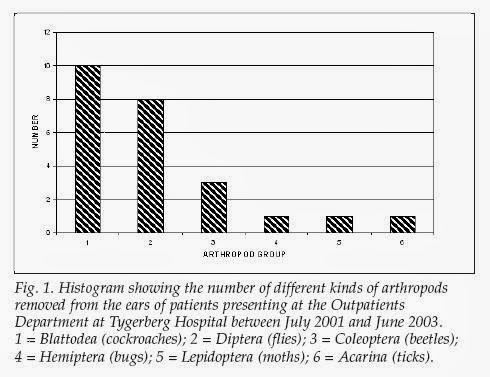 If you get any of these don't try and remove it with a vacuum cleaner.
Posted by Ed at 20:51
Labels: cockroach, ears, inverts in the news
Newer Post Older Post Home