Thanks to Max Barclay for posting the link to this on Facebook: Unusual Tea Additive. (Max thinks the beetle is liekly to be Gametis jucunda.)
It's always worth checking your food for insects, you might find something even better than this!
Posted by Ed at 12:30
Labels: beetle, tea

I have blogged about my National Insect Week activities over at the Pestival blog: Insect Week by Ed Baker.
Posted by Ed at 11:56
Labels: Insect Week, pestival

On Saturday, 5th June Heather Bonney and myself met up with colleagues Max Barclay and Conrad Gillet at the Alexandra Palace BioBlitz.
For those unfamiliar with the BioBlitz concept the idea is that scientists and the public descend en masse on a given area and identify as many species as possible. This event was organised by OPAL and was paqrt of BBC Springwatch's Wild Day Out festival.
Scientists from the Natural History Museum were there to identify species that other people had found, and lots of national and local wildlife charities and projects had interesting stands.
We found lots of species of beetle (hardly surprisng given we had Max and Conrad with us), hundreds of grasshopper nymphs, several damselflies and the odd newt. Mantids of the Euro-Mediterranean Area 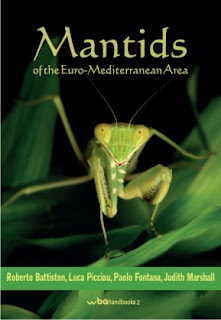 Just a brief post to announce that my Natural History Museum and Phasmid Study Group colleague Judith Marshall has co-authored this new book on the Praying Mantids of Europe and the Mediterranean. I have a copy and while I haven't had the time to get beyond the introductory chapters it is excellent (and lavishly illustrated with line drawings and photographs).
A must for anybody with a serious interest in this enigmatic order.
Posted by Ed at 07:09
Labels: book review, judith marshall, praying mantis
Newer Posts Older Posts Home
Subscribe to: Posts (Atom)