Circus of the Spineless Issue 36

Here it is, Issue 36 of Circus of the Spineless! 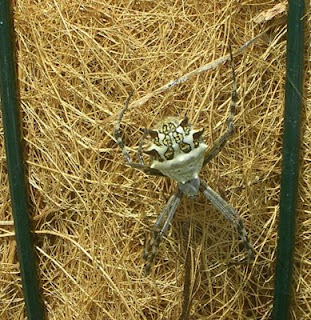 At Unfuture chronicle Scott has some photos of a first-hand encounter with an impressive orb-web spider that feeds on bees. Another orb-web submission came from The annotated budak, with another excellent photograph.

Two more arachnid submissions from The annottaed budak: firstly another spider, this time a Ctenid or wandering spider, and secondly a huntsman spider.
Cnidaria At Observations of a Nerd, Christie posts (with photographs) about a jellyfish found on the beach. (Also, find out what marine biologists enjoy doing in their spare time!)
Crustacea
Nina at Nature remains has some amazing photographs of freshwater crayfish.

In the first Darwin-related post, Eric at The Other 95% gives some background to Charles Darwin's work on barnacles and the role they played in his scientific career.

Amphidrome has a post on crabs and barnacles of the Texan panhandle, including interesting salt spring fauna. In a second post from Amphidrome the gammaroids of Lake Baikal are discussed, and illustrated.

Over at Southern Fried Science there's a report that a soil fungus with a world wide distribution has been recorded for the first time as a a coral pathogen.
Insecta

Ted at Beetles in the Bush covers a recent revision of some of the less well-known buprestid beetles (genera Calodema and Metaxymorpha). These jewel beetles are amongst the most colourful (and best illustrated) that I've come across for a while.

Cheshire has a suitably Darwin-related post about Philornis downsi, a fly parasitic on the famous Galapagos finches.

Zen at NeuroDojo has an interesting (even more so for me as an orthopteroid specialist) post covering a recent paper on whether male crickets shorten the life of females. Well worth a read! Zen also touches on another one of my favourite issues, nomenclature and language, in this post.

Ben has photos of some moths and an ichneumon that turned up in his moth trap.

KeesKennis has a photo of a large phasmid from South Africa (Bactrododema sp.).

Wanderin' Weeta has sent in a few posts on gastropods. The first documents the return of natural biodiversity following the near-dominance of an invasive species. The second shows us snails eating barnacles, and more! Finaly there is a photo of black turban snails.
Miscellany
The Oyster's Garter has some images of what seem to be Blaschka glass models. These truly are marvellous pieces of glass work.
Posted by Ed at 07:57
Labels: circus of the spineless

Great job! Since when are fungi invertebrates? ;p

I would argue "Since when do fungi have a spine?" ;)

Another great circus! Thanks for compiling it all!

(Though I think we need to have a debate on the status of fungi as invertebrate animals.)

They're closer to animals than plants - it's an interesting debate!

(besides, i think there were some cnidarians in the post too...)

Hi Ed, thanks for the circus!

I must correct the 2nd bit about the 'harvestman' though. The treehugging spider is a true spider in the Huntsman family (Heteropodidae) not an Opilionid.