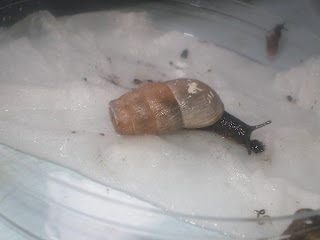 Rumina decollata (Decollate Snail) is a predatory snail found in the Mediterranean region that feeds on other small snail species. Unlike the familiar snail species the end of the shell is truncated and has a 'plug' at the summit to retain shell integrity. Adults generally retain around four whorls. The shell in adults is usually pale brown or yellow, baby snails are generally much darker.

I obtained half a dozen adults from a friend in Italy, where the snails are known to aestivate in periods of low humidity and/or high temperature. It has been noted that the snails may burrow to considerable depths in the soil in extreme cold, and are capable of withstanding dehydration for several months. Dundee (1986) noted that markecd snails released into the wild did not stray more than a metre from the point of release over a period of six months!

The 'decollation' or removal of the apex whorls is said to be aided by the snail violently banging the shell against rigid objects - but this is unconfirmed. The evolutionary benefit of decollation is liekly to be due to increased agility due to a smaller shell and a lower weight.

Snails start to reproduce around the age of 12 months, and the 2mm diameter eggs are laid in shallow depressions in the soil. A typical incubation time is around one month.

The snails supplement their diet of vegetation with other small snail species, slugs and even worms. I have managed to successfully rear and breed this species on a diet of apple occassionally supplemented with other fruits and salad leaves.

My first baby snails hatched in early June 2007, although I was unable to observe the eggs or egg laying. I estimate that I have around 20-30 baby snails, although this could increase as they often burrow.

The snails do not seem to predate their own species, even when transported in close confinement. They can be kept in a large tupperware container, as long as there is space for 4-5cm of soil, and at least 10cm free space above the soil layer. For this species are use an approximately cubical container, withs ides of length 20cm. This is suitable for 3-4 adults. The soil should be kept mosit at all times. The snails may benefit from a period of drying out (maybe 4-6 weeks) to replicate summer conditions but sof ar this has proved unnessecary in my breeding attempts. 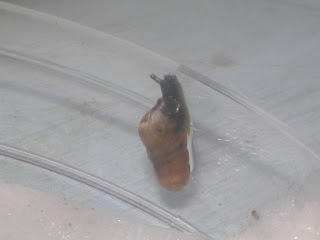