In the News: Bryozoans may look like coral but the similarities end there 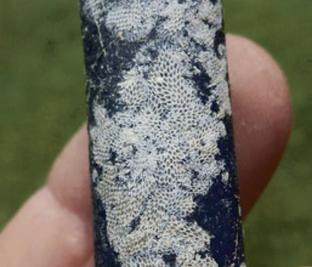 From the Star Advertiser: Bryozoans may look like coral but the similarities end there


During the recent marine debris conference in Hono­lulu, I overheard an artist explain to a student that coral grew on drifting plastic. The piece they were examining had a splotch of cementlike growth stuck to it. That white stuff, however, was not coral.

"Those are bryozoans," I said.

As soon as I said it, I wished I hadn't because the artist, of course, said, "What's a bryozoan?" And I didn't have a good answer.

Even as I write, with three zoology textbooks, a field guide and the Internet in front of me, I'm still struggling with how to describe the little creatures called bryozoans.

Part of the problem in describing these animals is the variety of forms and lifestyles they take. Bryozoans can be upright and branching, thin and encrusting, lacy and fragile, tangled and bushy. A few bryozoans walk on sand using rowing movements of whiplike appendages. A freshwater, jellylike species creeps over plants like a snail.